I have three lovely side-laced gamurre that were made for me by Countess Sibilla of Trimaris. I would like to explore how to increase their amazingness by adding a few more period elements to the dresses/sleeves and adding more accessories. I must admit that this is primarily driven by the lavish appearance of many other Italian personae at events. I love bling, and I love jewelry, but how much is too much for a noblewoman in an Italian city-state in 1492?

From Aneafiles.webs.com: “Also called gamurrino, camora, zimarra, camurra, zottana, gonella or zupa (see also sottana). Considered to be the basic version of a woman’s gown. In 15.th century Florence it was probably the generic word for “dress”, because it was worn by all levels of society, and could be made of any type of fabric (Frick 2002: 309). Up until the 1450’s the garb could be worn alone, and the sleeves were of the same fabric as the dress, but later on it was custom to wear an out-of-doors garb overneath, and the sleeves could be separate and of a richer fabric (Frick 2002: 309, Herald 1981: 217), or not worn at all. It was usually unlined in the 15.th century (Herald 1981: 217).

Making a gamurra required 10-15 braccia, so gamurras with richly made fabrics therefore formed a direct indication of the economic value of a woman (Woods 2007:42).”

So far, I have collected images of late 15th-century paintings where the dresses themselves are rather plain, like this navy blue worn by Caterina Sforza. So my gamurre are rather plain. I add the appropriate belt, belt pouch, jewelry, hat or hairstyle, and in this example, gloves to finish the look. 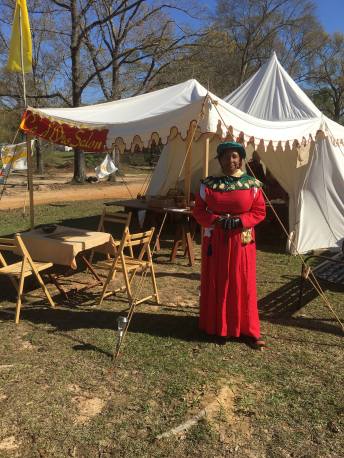 Upon further research I have uncovered a few styles worn that alternate fitted sleeves with long, draping sleeves of contrasting material.

I have also found striped dresses like this one worn by Beatrice d’Este.

Lastly I came across dresses with fancy laces and delicate coazzone hair dressing. Which happen to be my favorite, worn by Violante Bentivoglio Malatesta in 1492.

What is a Giornea?

Jacqueline Herald describes it as a summer garment, more popular in Florence than in the north of Italy, but according to her the Tuscan version could also be lined with fur and worn in the colder months. It was considered a garb for the young (Herald 1981: 218), but by fashion rather than by law. According to a 1456 law, a woman was allowed to own two outer garbs of silk, be it a giornea or a cioppa; one for summer wear and one for winter wear (Herald 1981: 218).”

In these I notice a few things I can do to add to my current wardrobe: