Italian dance manuals. The late sixteenth-century Italian manuals are noted for their enhanced detail regarding ballroom etiquette and the increasingly difficult step vocabulary that includes descriptions of jumps and turns. Most of the dances are social, choreographed for one couple. The majority of these dances (called balli or balletti) usually begin in duple meter and change to a triple meter; some have up to four changes of meter. The step patterns for the dances are symmetrical and the floor patterns are strictly geometrical. The three manuals, Il ballarino (1581), Nobiltà de dame (1600), and Nuvone inventioni di balli (1604; originally published in 1602 as Le gratie d’amore), have similar formats for explanation, consisting of text descriptions of the step sequences with music given in Italian lute and/or mensural notation.

Click here to listen to Arany Zoltan play a Salterello
Fabritio Caroso. The first Italian dance manual that described steps and provided choreographies and music for popular dances of the late sixteenth century, Il ballarino, was written by dancing master Fabritio Caroso in 1581. This manual, written for the upper classes, included a theoretical section on dance, etiquette, descriptions of steps, and choreographies and music for eighty dances. In 1600, Caroso issued Nobiltà de dame, which is considered the more valuable, as terms and definitions were fine tuned and, in some cases, corrected; the musical notation and choreographic text were better described and fit together more easily. Nobiltà di dame contains descriptions for sixty-eight steps and forty-nine dances. Both of Caroso’s manuals provide music written in Italian lute tablature and/or mensural notation and are copiously illustrated with copperplate engravings. 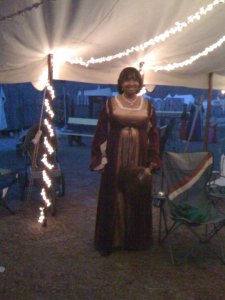 Cesare Negri. Originally published in 1602 as Le gratie d’amore, Negri’s treatise was reissued in 1604 as Nuvone inventioni di balli. The manual, including the copperplate engravings, was similar in format to the works of Fabritio Caroso, however, many of the steps described by Negri were far more difficult and virtuosic. The manual was divided into three sections, and the first began with a discussion of Negri’s professional life as a teacher. The second explained the galliard and galliard variations; perhaps most important for the wide range of galliard variations, Negri’s manual makes a major contribution by recording the virtuosic steps then available, especially for male courtiers. One of the difficult galliard variations that often included multiple pirouettes and tours en l’air was called “Kick to the Tassel,” and a series of illustrations accompanied the text. The third and final section of Negri’s manual provided definitions of steps and step patterns, with forty-three choreographies and their appropriate music. As with the choreographies in Fabritio Caroso’s manuals, most of the dances were for a solo couple; however Negri also included dances for three and six dancers, as well as thirteen dances for two couples. Negri’s treatise was the only late Renaissance Italian source that provided choreographies for theatrical dances designed for amateurs, and his manual included four.