I want to take a moment to thank Signora Fabbri for agreeing to this interview. For those of us on the west side of the Atlantic, this may be the first time a modern historian of the clothing worn in 14th and 15th centuries enters into a dialogue with a living history organization. Signora Fabbri is a subject matter expert of historical textiles and tailoring as far as I (and many others) are concerned, but if you have any questions simply look at the body of her research and work in answer to question number 1.

Signora Fabbri has recently published a book entitled, La Moda Italiana Nel XV Secolo (available here in Italy and available on Amazon Kindle in the US). It is in Italian and I have done my best to translate the major bits of info in my blog post here (Renaissance Fashion 1300-1500). Her book, La Moda, covers Italian fashion of the quattrocento (15th century). Most of the questions below are geared towards the clothing information in her book, and in one of her answers she hints that the book may be translated into English (please support this by commenting below that you would be interested in the English version!). If you have other questions for Signora Fabbri, simply comment below and I will forward your questions to her.

I am a member of the largest living history (rievocazione) group in the world, the Society for Creative Anachronism (SCA). We have well over 30,000 members who engage in a broad range of activities, including armored combat, jousting, rapier ﬁghting (fencing), archery, equestrian activities, historical cooking, medieval dance, and recreating medieval arts and sciences. This includes a broad range of domestic arts and sciences (fashion/tailoring, textiles, herbalism, woodwork, blacksmithing) as well as medieval music and theatre. Other activities include the study and practice of heraldry and scribal arts (calligraphy and illumination). We choose the time and place we study from the many pre-17th cultures of Europe and I have chosen Renaissance Italy (1300-1600). I am particularly interested in the central and northern Italian city-states of Firenze, Venezia, Verona, Ferrara, Bologna, Imola/Forli, and Mantua.

In real life I am a sociologist with a Master’s Degree in social science, so I love learning about people. In living history I get to bring the people of northern Italy from 1300-1600 to life. I am thrilled when I learn something new about their pastimes, medicine, games, clothing, heraldry, culture, customs, or lives. I have traveled many times over the past seven years to Florence, Venice, Verona, Forli, and Ferrara to conduct research by visiting museums, archives, and historical sites. I found Dotoressa Fabbri ﬁrst when I was searching for more information on the clothing of women in those cities during the trecento, quattrocento, and early cinquecento. I have long been a fan of Signora Fabbri’s work and am honored to ﬁnally meet her across the internet. Here is a list of questions that were translated into Italian for her answer, along with her answer in English directly below.

1. What is your background? Tell us about you.

After studying arts I attended a school of fashion, the Istituto Marangoni Fashion & Design in Milan (www.istitutomarangoni.com).

I collaborated for ARS HISTORIAE, which used to be the official magazine edited by C.E.R.S. Italia – Consorzio Europeo Rievocazioni Storiche (www.cersonweb.org).
Here are some articles of mine, in the Italian language, I got to publish in it (you may read the original Italian titles above):

Conferences held in Italy about historical clothing (you may read the original Italian titles above):

– February 2009: Male and female civilian garments in the 15th and 16th c. – Rocca Scaligera, Castle of Arzignano (VI) – April 2009: Fashion in Lombardy in the second half of the 15th century – Isola Dovarese (Cremona)
– October 2010: Re-enactment at the service of craftsmanship: clothing and footwear – Calolziocorte (LC) Collaborations:

– December 2006: Le usate leggiadrie. The parades, ceremonies, celebrations and custome in the Mediterranean area between the 15th and 16th century – speech at the conference on Diego Cavaniglia held in Naples

– Naples, December 14th-16th: cooperation for the exhibition setting named The costume of an era (ITA: Il costume di un’epoca), which consisted of an exposure of clothes from Diego Cavaniglia’s grave goods held at the Church of San Lorenzo Maggiore, Naples, in the context of the conference mentioned above.

– Since 2005 cooperation with Dr. Lucia Portoghesi in the restoration of the grave goods belonging to Gregorio VII (X century) and Diego Cavaniglia (XV century)

(Here are the conference names in Italian)

– Replica of Diego Cavaniglia’s late 15th c. doublet, now kept together with the original at the Convent of St. Francis in Folloni, Montella (AV)

2. How did you ﬁrst become interested in historical clothing?

It is very difficult to answer this question… I think my interest in historical clothing it’s kind of innate! There’s no particular reason actually, it was born since I was a child and developed on its own. 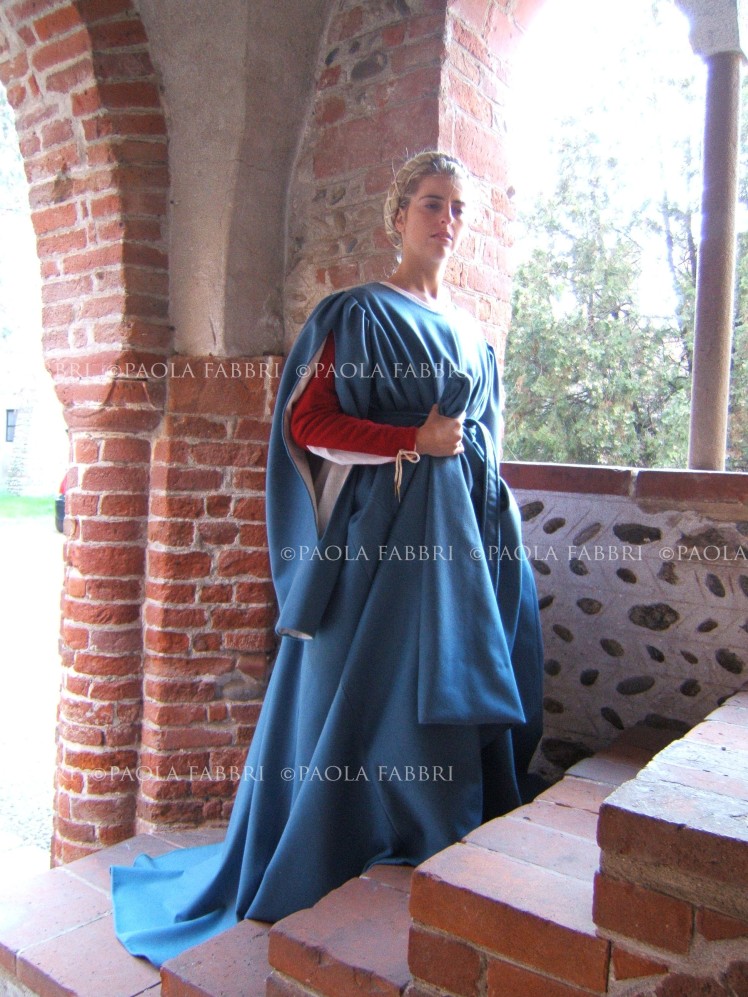 3. What made you decide to write this book?

My idea was gathering in a single work the information at my disposal.

4. Did you study at a University in Italy? Which one? How did you enjoy it? Would you recommend it for others who are interested in historical sociology, speciﬁcally clothing?

No, I didn’t study at the University. As said above, after studying arts at the High School I attended a school of fashion, the Istituto Marangoni Fashion & Design in Milan; then I privately pursued my studies concerning the historical clothing and had the luck to take part in a few restoration projects.

5. What are you personal hobbies and pastimes? Do you have pets?

My hobbies are vegan baking and cooking; I have 8 cats and a dog.

I just take part in events as a viewer. I would suggest the Armour Tournament (ITA: Torneo in Armatura) organizzato da FAMALEONIS Cultural Association (www.torneoinarmatura.com/english.html ; http://www.famaleonis.com/company.asp)

7. Do you ever come to the US to teach about historical clothing?

No, I’ve never been to the US.

8. Will your book be available in print?

The editor is thinking about that option.

9. I read that you have studied original ﬁnds. Tell us about them? Were any in Italy?

Referring to the 15th century, I had the luck to work for the restoration of two garments that belonged to Diego Cavaniglia, a noble native of Campania who died after being wounded at the Battle of Otranto (1481); I’m talking of a doublet and a “giornea”, the latter is the only surviving for the time being. These finds are in excellent conditions, considering they are grave goods. The doublet is made of silk damask and the “giornea” is made of crimson silk satin, both exhibited in the museum inside the Convent of St. Francis at Folloni, Montella (AV). I also studied Pandolfo III Malatesta’s funeral doublet, dated to the first quarter of the century, made of crimson silk velvet and now preserved in the Civic Museums of Fano (PU).

10. What is your favorite historical veste/sopravveste combination? 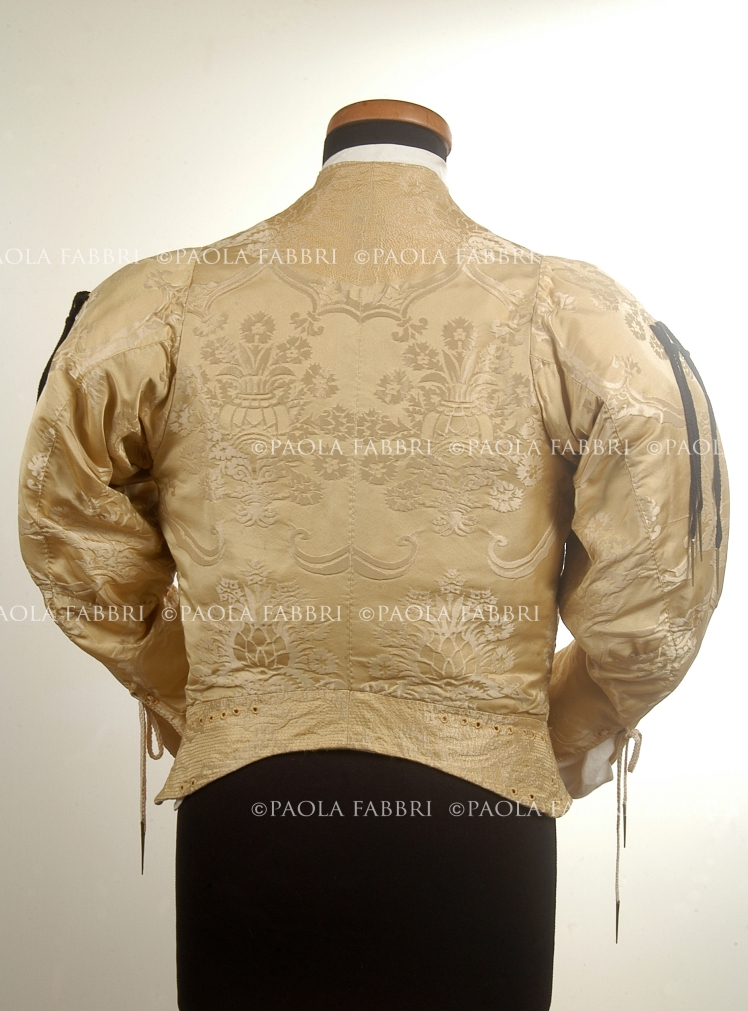 11. Is there a place you recommend that sells the proper Italian silk velvet or brocade for reenactors to buy for the aristocratic clothing they make?

I would suggest both the Fondazione Lisio in Florence (http://www.fondazionelisio.org/) and the Seterie Cordani at Zoagli (http://www.tessiturecordani.it/) but let me warn you that their products are really expensive.

12. Many of my followers are familiar with Herjolfsnes dress. Since Italy is so far from Greenland why is that a good basis to pattern trecento & quattrocento gonnelle, cottardite, and cipriane?

We should consider Herjolfnes patterns only valid as far as the 14th century is concerned. Given that Italian finds from this period are not known at the moment, we may assume, also basing on the iconography, which those clothes could have the same type of cut in Italy as well. To clear up any misunderstanding: are NOT suitable for the Italian 15th century.

13. What construction techniques would you recommend for those wanting to make a gamurra?

You can cut the bodice into 4 quarters (2 front and 2 rear ones) and the bottom in 6 sheets, always bearing in mind that the height of the textiles at that time did not exceed 70 cm. Six sheets with a width of 70 cm at the bottom provide a wide drapery, equal to about 4.20 mt. As for the waist portion, to be attached to the bodice, I usually proceed as following: I divide the underbust circumference into 6 and multiply the result by 3. Example: considering an underbust circumference equal to 90 cm., I’ll have 6 sheets of 45 cm. at the waist (90/6 = 15 and 15×3 = 45) and 70 cm at the hemline; at this point, you must curl the waist until it is 90 cm.

14. How do you feel about “princess seams” (a seam that runs in a curve from the shoulder to the waist that passes over the breast)?

Italian iconography doesn’t show those seams. Anyway, when a woman has big breasts and a small waistline, that is inevitable. At the moment in Italy we do not possess relics of genuine female garments (gamurre) enabling to say with certainty whether it was or not in use. Therefore, we can only make assumptions.

Veronica Franco, a Venetian poetess and courtesan who lived in the 16th century, for her great strenght and culture.

No, I didn’t know that. Thank you so much but I don’t deserve it! Mrs Arnold was one of the greatest clothing historians.

17. Who are inspirations for you in the historical research world? Why?

Dr. Doretta Davanzo Poli, because she’s one of the major italian spokespeople as far as the history of costume and textile field is concerned.

20. Are there other time periods and countries that you study the clothing of?

As for historical periods, my work goes from the Roman times to the early 19th century but I’m specialized in the 14th and 15th century.

Actually I don’t like the idea of living in the past.

23. Who are the reenactors ( rievocatori ) that you look up to in Italy? I ask because I would love to look at examples of people wearing your work and also recommend for my friends to visit those blogs and Facebook pages.

24. Would you ever be open to working with any of us in the US to translate and market an English version of your book? (I would personally work to help translate it for free)

I’ve already talked about this with the publishing house (Bookstones), which is planning to proceed  with the English translation of my e-book The Italian fashion in the 15th century (ITA: La moda  taliana nel XV secolo). In order to do so, they are thinking to launch a crowdfunding campaign  on http://www.kickstarter.com platform, so to raise the necessary funds. To achieve our goal, however,  we need to drum up interest in our project and get to really interested people, such as the followers  of your website and Facebook page. Can we count on your cooperation to spread and push somehow the news?

25. In English we do not have a lot of information on Italian clothing during 1300-1500. Once my readers have a chance to buy and read your book, would you give us another interview with questions on the clothing? They would beneﬁt greatly from your clariﬁcation and advice.

Of course, it will be a pleasure.

11 thoughts on “Interview With Paola Fabbri: Expert in Historical Tailoring”