Did Starbucks know they were paying homage to a 7th-century Italian motif when they chose their logo? The first one below, on the left, is a melusina (melusine) or mermaid in the facade of San Michele, Pavia, Italy. The second one, on the right, is from the crest of the Colonna family. 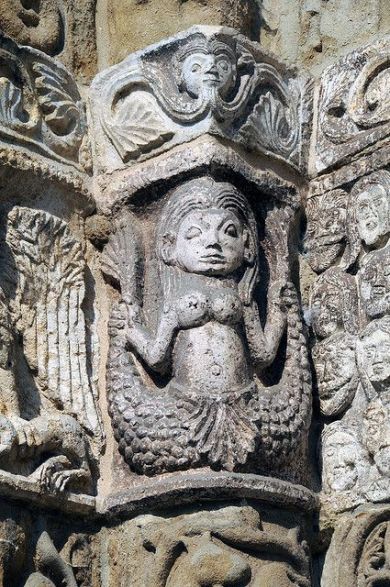 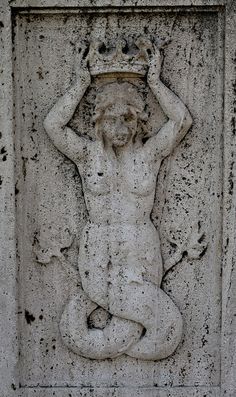 I’m taking some time off from my hometown and am on a three-month cross country trip. If you’d like to see some of the stops I’ve made feel free to visit countryboycitygirl.com to read about them.

For now, I’m in Washington State and boy do they love Starbucks. I’ve been here for three weeks and what is that saying, “when in Rome”? So, I’m at Starbucks right now and wondered a little about their logo. I know the name comes from Moby Dick but I wonder where the mermaid with two tails came from. Did a little digging and found a cool Italian connection that I thought I’d report on.

I found an article from 2015 by Angelica Calabrese that explains it all titled, ” The Siren on Your Starbucks Cup Was Born in 7th-Century Italy”:

ON A LATE OCTOBER MORNING, the wind howls through the winding streets of ancient Otranto. Whitecaps curl up from a bright blue sea, smashing against the fortified walls of the southern Italian city. Otranto was once considered the easternmost tip of Western civilization, with just under 50 miles of Mediterranean sea separating the city from Albania. From the city’s bay, Crusaders left on missions to the Orient, early Christian travelers returned from pilgrimages to Jerusalem, and in the 15th century, the Ottoman Turks launched their attack on the city. All of these parties passed by the Otranto Cathedral at some point during their journey.

In the sunlight, the exterior of the cathedral is golden. The structure, built in 1088, is simple, with a few arched windows and carved capitals. But inside, wild animals, biblical characters, and fantastical creatures cavort across the cathedral floor. A monk named Pantaleone and his team of artisans created the enigmatic mosaic in the 1160s. It’s one of the largest in Europe and depicts all the important stories and figures of the time: the Tree of Life, the expulsion from Eden, Alexander the Great, elephants, sphinxes, centaurs, and much more.

How all of these stories and images from distant cultural traditions made their way onto the mosaic is still a mystery. But most intriguingly–at least for the contemporary coffee consumer–is a detailed image of a long-locked, sweetly smiling, twin-tailed mermaid.

Indeed, she looks a lot like the stylized green lady gazing staring serenely back at you from the white cup on your desk holding your cooling coffee. Though Starbucks claims that their image was originally drawn from a 16th century Norse woodcut, a little exploring reveals that the world’s most famous mermaid was famous long before the 16th century–and long before Starbucks.

On the backs of a male and female elephant, the Tree of Life stretches towards the apse of the church, with various stories documented on the branches of the tree. One segment is a medieval calendar, depicting every month of the year with its zodiac sign and related activities: for example, in September, a peasant pounds grapes with his feet underneath an image of Virgo. Another segment depicts heaven and hell, with punishments similar to those that would be described 200 years later in Dante’s Inferno. The fabled King Arthur rides his horse next to Cain and Able, laborers construct a soon-to-crumble Tower of Babel, the Roman goddess Diana shoots a deer, and in the mosaic version of a medieval bestiary, sphinxes and lions claw at one another.

With stories and symbols drawn from the Bible, the Koran, Greek mythology and medieval stories, the mosaic is a testament to the diversity of ideas that circulated in southern Italy during the Middle Ages.

Inhabited since in the 8th century BC, with a strategic position at the center of a rich trade between the East and the West, Otranto would clock time as a part of the Greek, Roman, Byzantine, and Norman empires. The Cathedral, commissioned by the city’s Norman rulers for completion by local Greek-Italian monks, combines early Christian, Byzantine, and Romanesque styles. Otranto was also home to a thriving Jewish community from its inception, and some hypothesize that Kabbalah is the key to understanding the unusual mosaic.

The twin-tailed mermaid is located in a section of the mosaic typically thought to represent virtues to aspire to and vices to steer clear of, in the form of various mythical creatures and historical figures. Along with a unicorn, a leopard, an elephant, the Queen of Sheba, and others, the mermaid likely served to remind the many travelers who passed through the cathedral to beware the temptations, carnal and otherwise, that might lead them to stray from their path.

But in cities such as Otranto, with long histories of various rulers, cultures, and belief systems, no interpretation is certain, and it’s nearly impossible to trace the precise origin of an image like the twin-tailed mermaid. In many different ancient civilizations, from West Africa to Mesopotamia, the mermaid was a fertility symbol uniting man and nature. The first recognizable mermaid image appears on an Assyrian palace in 800 BC, with later cameos in Homer’s The Odyssey, and Etruscan funerary urns from 300 BC. Others claim the mermaid is related to Sheela-Na-Gig, a fertility symbol found in Ireland and Britain, and still others say that she may have been inspired by the allure of women from Eastern countries.

The particular split-tailed and long-locked mermaid whose descendants populate coffee cups all over the world first appears on the mosaic floor of a cathedral in Pesaro, Italy. This mosaic was created during the Byzantine era, in the 7th century. Five hundred years later, she became a focal part of the mosaic in the Otranto Cathedral.

It’s difficult to know where else she might have been depicted in the centuries in between, what mosaics and sculptures and frescoes may have been lost over time. But Otranto was a highly trafficked port city at the time, and it is possible that the image in the cathedral may have inspired other artists and travelers.

The mosaic’s depiction of Satan in hell. (Photo: Angelica Calabrese)

Also popular in port cities like Venice, by the 13th century the twin-tailed mermaid began to travel through Europe. She became a crucial member of the medieval “bestiary,” a collection of animals used to decorate church capitals, porticoes, and religious texts. These fantastical figures served to warn men and women against the vices condemned by the medieval church, like temptation, greed, and pride. In the 14th century, a French text was published that described the story of Melusine, a beautiful queen whose bottom half became serpentine while she bathed; this character soon became associated with the twin-tailed siren.

When Starbucks was preparing to open its doors in 1971, the founders were in search of an image that could represent their fledgling Seattle coffee company. “There was a lot of poring over old marine books going on,” Starbucks staff writer Steve M. wrote in a 2011 blog post, and “suddenly, there she was: a 16th century Norse woodcut of a twin-tailed mermaid, or siren.”

While some have tried to track down the “16th century Norse woodcut” from which the original image was culled, others, like blogger Carl Pyrdum, argue that such a woodcut never existed. “By the time woodcut images on paper arose in medieval Europe, around 1400 give or take a decade, there weren’t any people that you could properly call ‘Norse,’” he writes in a post on Got Medieval.

The “woodcut” was likely drawn from an image of Melusine, who was popular in France and Northern Europe during the 15th and 16th centuries. This first siren had bare breasts, a plump stomach with a belly button, and promiscuously splayed tails, though redesigns have hidden these features. Howard Schultz, the businessman who transformed Starbucks into a contemporary global coffee empire, described her as “barebreasted and Rubenesque,” in his book Pour Your Heart Into It: How Starbucks Built a Company One Cup at a Time.

The mermaid was supposed to be “as seductive as the coffee itself,” he writes. Seductive, yes–but a medieval consumer confronted with the symbol would have known that she was a reminder to resist temptation, rather than to succumb to it. According to the company’s website, Starbucks also believed the siren’s image could “capture the seafaring history of coffee and Seattle’s strong seaport roots.”

Seen on the logos across the world as well as in the mosaic of the Otranto Cathedral, the siren is a potent symbol of globalization–but a globalization that was thriving long before Starbucks came around. With her roots (or rather, her tails) in the Mediterranean basin, she is the inevitable production of the countless cultural interactions and exchanges that took place in the region–like coffee itself, and, in fact, like Starbucks. After all, it was Italian coffee culture, its espresso drinks and leisurely cafés on every corner, that inspired Schultz to create his own coffee behemoth.

Maybe someday the mermaid on the mosaic of Otranto will be face to face with her modern reincarnation on a glass-walled coffee shop on the other side of the church’s piazza.