The first sumptuary office in Florence, known as the Ufficiali delle donne, was created in 1330 to enforce all of the sumptuary bans adopted that year. By the fifteenth century, secret denunciations made by Florentine citizens and placed in boxes known as tamburi, were a commonplace.

The cities of Florence, Perugia, Viterbo, and Venice all provided special boxes where secret
denunciations could be left against individuals who allegedly broke the sumptuary laws. The Venetian case, however, is particularly revealing of both, the enforcement efforts and the obstacles they encountered, In Venice two bocche (or mouths) were constructed in 1562 outside the office of the Magistrato alle pompe in the ducal palace.

The first contained the inscription, “Denontie secrete in material d’ogni sorte di pompe contro cadauna persona con benefici de ducati 42 per cento giusto alle leggi.,” (“Secret denunciations concerning every sort of luxury against any person whatsoever with rewards of 42 ducats per 100 according to the laws.”)

The second was inscribed with the statement, “Denontie secrete contro ministri dele pompe con l’impunità secreteza e benefitii giusto alle legi.” (“Secret denunciations against ministers of luxury with impunity, secrecy and benefices according to the laws.”)

The latter inscription suggests that the officials charged with the enforcement of the laws could themselves not be trusted to do so. It also raises the question of who, other than the corrupt officials of this magistracy, were to read the denunciations left in this second bocca.

Medieval Florence, like many European cities, had ‘sumptuary laws’ to regulate luxury items, with an emphasis on women’s clothing. These laws proved difficult to enforce upon the clever Florentine women, however. All clothing was regulated, but there were few—if any—prosecutions brought against men, while a multitude were leveled at the female sex.

Did this stop Florentine women in the Middle Ages from expressing themselves with their fashion sense? Not at all. First of all, you could buy a license granting special permission to wear a banned item. Alternatively, one could simply wear the forbidden clothing and pay a small fine each time. Some Florentine men willingly did this to keep the ladies in their life happy.

For some women, outwitting the authorities became a game. Even with ‘fashion police’ patrolling the streets and denunciation boxes in situ to submit accusations, these elegant ladies were not easy to catch. If an extravagantly dressed damsel saw an officer, she could duck into a church where the fashion police were not allowed and try to out-wait him, or she could try to talk her way out of the fine. These ladies became adept at arguing law as the following story shows.

Around 1384, a new official arrived in Florence to take charge of the Office of Women, which was responsible for enforcing the sumptuary laws. This position was always filled by someone from another town, since no local man wanted to take on the fashionable Florentine ladies. After the new official had been in charge for a while, his superior called him in to ask why there had been no changes to the fashions on the street. The official answered that he and his deputies had tried their best, but they simply couldn’t legally fine these women.

He said, ‘I’ve spent my whole life studying the law. But next to these women, I feel like I know nothing. Your women always find reasons why the laws don’t apply to them.  Here are some of the reports from my deputies:

The Florentine women were not only fashionable but they stayed informed about the laws and made sure their wardrobe stayed just ahead of them. It must have been frustrating for those trying to enforce the laws but good for the fashion industry. The city of Florence tried to regulate women’s clothing for a few hundred years before realizing the impossibility of the task and giving up. 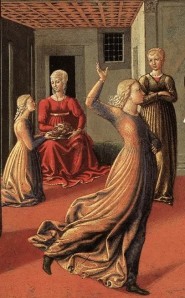 One thought on “Illegally Fashionable – Sumptuary Laws In Renaissance Florence”